What is Waterproof Concrete?

In order to provide sufficient workability for proper placing & compaction and to facilitate proper mixing and transportation to site, most plant-batched concrete will contain water in excess of that required to simply hydrate the cement. As concrete hardens, this excess water leaves the concrete and creates a network of fine capillaries and internal pores. Natural capillary absorption is the predominant mechanism of water transport through concrete whether or not a head of hydrostatic pressure is present. In essence, as far as water is concerned, normal concrete behaves like a dense sponge.

One cubic metre of normal, good quality dry concrete will absorb the equivalent of roughly 60 litres of water in just 30 minutes! (Test in accordance with BS 1881, part 122). It is the speed of this absorption that is important as this will directly affect the level of dampness, say in a basement, or the onset of reinforcement corrosion due to dissolved chlorides being carried into the concrete by water, say in a sub-sea tunnel, the tidal zone of bridge supports or from melting slush after de-icing salt has been applied.

Even the highest quality concrete contains a network of pores and capillaries and, without adequate damp-proofing protection, this may result in dampness or leaks causing deterioration of internal finishes, mould formation and a health hazard, especially in heated environments where damp concrete is a haven for bacterial development. Where chlorides and oxygen are present, corrosion to the reinforcement will occur. Where sulfates are present in the surrounding soils and groundwater, serious deterioration of the cement matrix can occur, both situations causing untold damage to the structure.

What does ‘Waterproof’ mean?

British Standards set out to ensure that reinforced concrete structures provide the degree of protection, internal environment and functionality required by owners or developers.

The term ‘Waterproof’ therefore conjures up a whole range of ideas. If the structure in question is to retain water, say a water storage tank, then the designer may simply work to the design requirements of the European water retaining code which sets out to limit crack width. This may be achieved by utilising a good quality, ordinary concrete, close attention to joint details and providing extra crack control reinforcement; dampness being acceptable.

If on the other hand the structure is habitable or designed to house sensitive electronic equipment or valuable archives, then simply designing to the water retaining code is not sufficient. This is especially so given that ordinary good quality concrete provides little resistance to the passage of water vapour.

There are several degrees of waterproofing to be considered, all loosely defined under 3 categories in BS 8102.

At the lowest level, Grade 1, there is ‘Water-tight’ which simply means that water will not run or flow freely through the concrete but minor seepage and dampness is accepted; at the upper levels, Grades 3, there is ‘Damp-proof’, which not only requires there to be no visible water ingress or dampness but also that very high levels of water-vapour resistance will be achieved. This applies whether or not hydrostatic pressures are present.

We must be clear here that the influence of cement replacement materials*1 and water reducing admixtures, though they may improve the apparent resistance to the inflow of water under pressure, may in fact create a finer capillary structure with the effect that capillary ‘suction’ is greatly increased and thus the flow of water through the concrete by capillary absorption is speeded up.   “… the narrower the pores in saturated concrete, the lower its permeability. The narrower the pores, the greater the resultant capillary pressure and so the greater the influx of water …” *2

*1 Pozzolanas are materials containing reactive silica and/or alumina which on their own have little or no binding property but, when mixed with lime in the presence of water, will set and harden like a cement, i.e. on their own they don’t do anything. E.G. pfa which is a by-product of coal fired electricity stations, also known as fly ash; ground granulated blastfurnace slag, a by-product of the steel industry sometimes called GGBS or slag; silica fume, a by-product of microprocessor silica production also known as CSF, and metakaolin, a product associated with the china clay industry

But how important is ‘pressure permeability’ when compared with ‘capillary absorption’ in regard to water transport through concrete?

“Calculation of the water penetration depth during wetting showed that the speed of capillary absorption is of the order of a million times faster than permeability” *1.

Thus, in terms of damp-proof concrete, ‘pressure permeability’ is irrelevant unless the capillary absorption problem is addressed. You will appreciate, therefore, that the idea that water passes through properly compacted concrete depending on water pressure is a complete myth.

How can ‘ordinary’ concrete be damp-proofed?

The traditional approach has been to attempt to ‘wrap up’ the concrete with a ‘waterproof coating’ of some kind, be it a tanking system, external membrane, surface coating or built up treatment in the case of a roof. Another approach is simply to accept that the structure will inevitably leak and to provide a drained cavity system inside the structure.

Membranes, tanking and surface coatings are invariably thin section, difficult to apply and rely heavily on the skill of the applicator to ensure integrity. If and when barrier systems fail, they may be on the wrong side of the structure (in the case of basement tanking) severely limiting the options for repair. Failure may be from bad jointing, pin holing, damage during back-filling operations or simply down to poor workmanship. Water or damp ingress seen on the inside of the structure may be at an area remote from the actual point of damage to the barrier system.

With cavity drained structures there is a loss or reduction in internal useable space and a potential maintenance liability as problems can arise unexpectedly, for example, failed pump, drainage channels silt up, over-loading due to local burst water main and the effects of rising water tables in many cities. Once such a system fails, water will usually run freely into the inner structure causing untold damage.

Attempted repair of a failed barrier or cavity drained system may not only cause significant delay in handing over a project but will be a concern to the owner and the cost of repair may be disproportionate to the cost of the original damp-proofing system used.

Is there not a better option? Possibly

If concrete could be produced which was intrinsically waterproof, damp-proof and corrosion resistant, the Industry would no longer have to rely on the risky business of applying membranes, coatings or other temporary barrier systems. This concept is not new; there have been numerous ‘so-called’ integral waterproofing systems developed over the years that purport to make concrete ‘damp-proof’. Many have been shown to be severely limited in their long-term performance due to low dosage or failure to address the mechanism of water ingress by capillary absorption.

To ensure that an effective and reliable system of integral damp proofing is adopted, it must meet the following important performance requirements:

Professional duty of care and responsibility!

The selection of any construction product must be done with care and this is especially the case with waterproofing of concrete structures. Failure here has been the subject of numerous claims and litigation, something that no professional person wants to be the subject of.

The problem is neatly summed up in a quote by John Ruskin (1819 – 1900): “There is hardly anything in the world that some man can’t make just a little worse and sell just a little cheaper, and the people who buy on price alone are this man’s lawful prey” 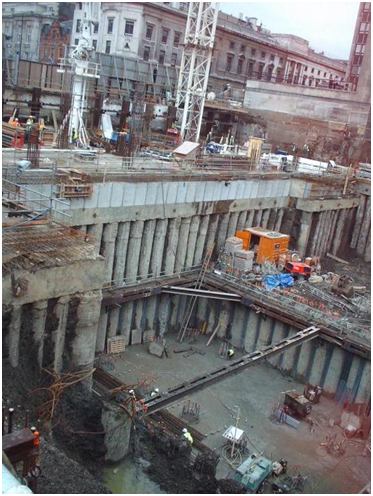 To demonstrate this point, in 1985, the Building Research Establishment carried out tests on behalf of the British Standards Institution with the idea of looking at the possibility of creating a standard for integral concrete waterproofing admixtures*3.

Suppliers of waterproofing admixtures were asked to submit their products for testing. 15 different tests were carried out on each of the nine products put forward and compared with a ‘Control’ mix. Most of the products were worse than the control in more than 8 of the tests.

Out of all the 9 so-called ‘Waterproofing’ admixtures tested, only one product out-performed the ‘Control’, and all the other products, in all 15 tests! Everdure Caltite.

Waterproof = Watertight + Damp-proof. If you are not concerned about dampness or high humidity levels, then watertight is fine. If, for example, you want a truly dry basement or tunnel or corrosion resistant structure, then you need it to be waterproof.

The most important point with reinforced concrete structures is to design and build the structures properly in the first place as there is little point in having a design life stated at 100 years if repairs have to start 10 years after construction is completed.

Premature deterioration of reinforced concrete structures all around the world is a major concern due to the vast amount of money that will have to be spent on future maintenance or re-construction. 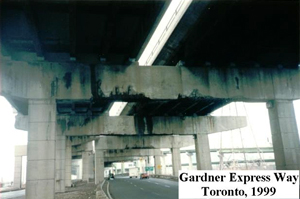 Whether one looks at the billions of Dollars spent annually in North America on concrete repairs.

Or in the Middle East, Far East, Africa or Europe, most of the problems could have been averted. 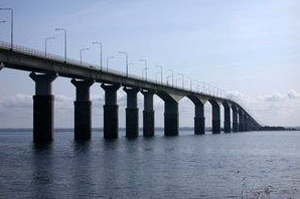 The Öland Bridge repairs completed in 2005 after about 15 years involving renovation work to the corroded pier supports in the tidal zone, replacement of 19 joints and restoration of the parapet walls cost: “twice the cost of the (whole of the) original bridge at current prices”.

Or as the project manager is quoted as saying:
“Buy cheap, repair expensively” 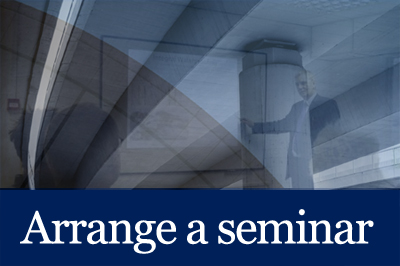 
Concrete containing Everdure Caltite has been used in over 10 million cubic metres of concrete in over 30,000 projects.

The way to better concrete… 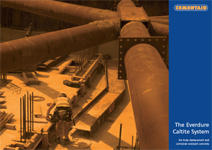